From California to Hawaii 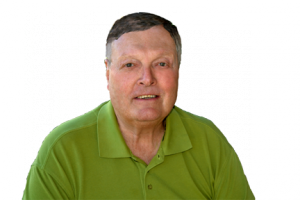 Ron has been in the field of architecture for nearly forty years with varied experiences in virtually all disciplines.  His work covers the Western United States, including Hawaii.  He has designed high tech plants, office buildings, jails, courts, governmental facilities of various uses, schools – both private and public, commercial centers of all sizes, material recovery facilities, solid waste disposal facilities, prefabricated and modular structures, and well over five hundred individual homes.

Ron was born and raised in Santa Rosa, California and went to the University of Idaho – originally on a basketball scholarship.  After two years he had to decide on either basketball or architecture, and a few years later graduated with a degree in architecture – the last two years with honors.  Of course those two years may be attributed to his then new marriage to Joanne, who, at his graduation, received a PHT (Putting Hubby Through) degree.  They have now been married over forty five years – forty in Auburn and raised four children who have given them nine grandchildren.

After living in Auburn for two years Ron was appointed to fill a vacancy on the Auburn City Council.  He served there for nine years, two as Mayor.   Later he served on the Placer County Board of Supervisors for four years.  In elected office he served on many committees, including Placer County Transportation and Planning Authority, Placer County Air Pollution Control Board, Placer County Solid Waste Management Board, Sierra Economic Development District, and Sierra Planning Organization.  He served at least one term as Chair on every committee.